When we performed Twelfth Night, we recall watching the forecasts like hawks – it looked ominous and we were terrified as we had actor-musicians in our troupe whose instruments we wanted to keep protected. The first performance stayed dry throughout, and we were beside a gorgeous lake (a lake which often reminds us of the lake Mr Darcy leapt into back in 1995!), resulting in ducks frequently being part of the action, including a standout moment in which there were a series of quacks when Sir Andrew walked away hurt after Toby berates him. There were also some impressive picnics in which another standout moment occurred – the actor playing Sir Andrew caught a cork popped by an audience member in mid-air!

Regarding the second show … we experienced torrential rain for the entire 90 minute performance. It never stopped – it was constant! 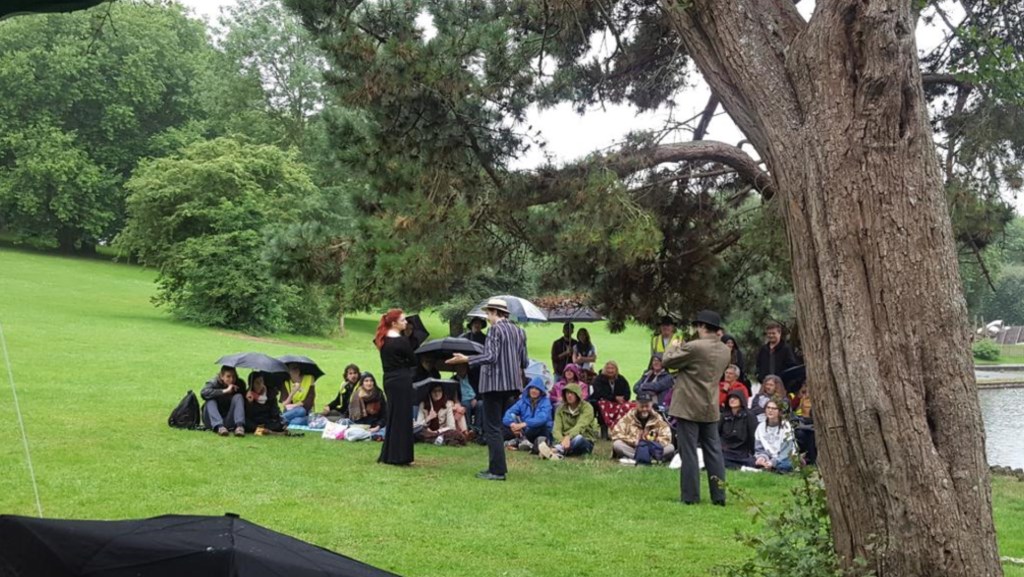 Of course, as soon as it ended, the rain decided it had had enough and stopped in sync with our show. Typical. But amazingly enough, it was one of our favourite performances of our Twelfth Night tour. We were expecting no audience but were wonderfully surprised to see a big audience despite the rainstorm (including thunder!) – they were very committed with their brollies and waterproof jackets. Last minute we shifted the show 90 degrees so the audience could be sheltered under the tree. Performing in heavy rain was exhilarating and it brought out another side to the emotional, watery play that is Twelfth Night. Plus seeing The Wind and the Rain performed in real rain was very special. We were lucky enough to receive a mini review in Shakespeare Magazine: ‘The festival closed with a performance of Twelfth Night in the verdant St George Park. It took place by a small lake, with the rain absolutely bucketing down. At the end, clutching futile umbrellas, the cast valiantly performed the song ‘The Rain it Raineth Every Day’. It was a truly magnificent Shakespearean moment’. A proud and happy company we were! 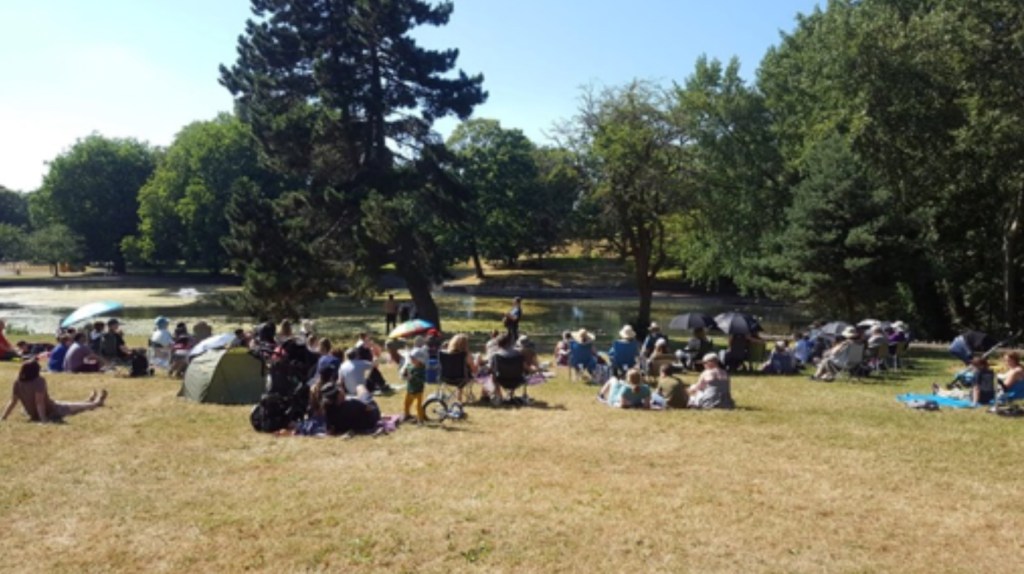 For the next show, As You Like It, it was a HOT day in the midst of a HOT season (such a contrast!), and we had an amazing time, with Shakespeare Magazine describing our show as ‘wonderfully life-affirming’.

For A Midsummer Night’s Dream this year, the weather was somewhat in between, lovely and mild, and everything was so green! We’d moved to the other side of the lake this year as we needed more shade for our film projection of Pyramus and Thisbe. Sadly Shakespeare Magazine were not able to attend this year, but they sent us their best wishes.

We’ve had audiences of all ages, as well as various dogs and puppies! A favourite moment was one of the dogs growling at Oberon as he tried to do his trickery on Titania. We’ve had audiences attend for which it is the first time they have ever seen a Shakespeare play, from children whose parents have taken them for this first experiences to adults who had avoided Shakespeare all of their lives. We’ve had parents who have been thrilled that they have been able to take their infants and small children to see a play, due to the openness of Shakespeare in the Park. We’ve had local audiences who were so touched that a theatre company had chosen to come to their area, giving them the opportunity to see free performances in their local park. Bristol audiences have been some of the kindest and most generous audiences we have ever performed for. We always ask our audience to write little post-show post-it notes and they have continued to move and inspire us, with personal favourites being:

Performing at St George Park led to local school Bristol City Academy getting in touch with us to do a performance at their school, as their students did not often get the opportunity to go to the theatre and A Midsummer Night’s Dream was a curriculum set text. We were so moved to be asked and we experienced a fantastic morning performing for Year 7-8 students, in which only 35% of the students had seen a Shakespeare performance before. Thank you to the Bristol Shakespeare Festival for connecting us with City Academy!

The Friends of St George Park community on Facebook have been wonderful for the last few years in coming to see our shows and encouraging others to come along. We have been so grateful for their support. Also, every year that we have performed at St George Park, we have based ourselves before and after at The Lock Up, a wonderful local café who continuously produce lovely food and have been so kind and accommodating to hungry actors in need of food and caffeine! We always look forward to coming back! Lastly, we are incredibly grateful to the Bristol Shakespeare Festival for hosting us these past few years and including us in their spectacular programmes. It is such a special festival and we feel so lucky to be part of it. Thank you so much!